skip to main | skip to sidebar

Stick to your own kind

AFTER A YEAR, I decided to watch again a musical in Belfast. The New Lyric has a limited staging of The West Side Story at Grand Opera House this week. This is a non-professional production, which means that the peformers are talented amateurs assembled by the performing company.

The musical revolves around the two rival New York gangs - Sharks and Jets. Tony (leader of Jets) met Maria - the sister of Bernardo (leader of Sharks) and it is a love at first sight and it leads to a blossoming romance. Unfortunately, because of cultural and ethnic differences, the romance between Maria and Tony is under threat which also brings more disagreements and clashes between the gangs. It is a tragic ending, but it brought the two groups united.

The song numbers include: Tonight, Maria, One Hand One, Heart, and America being accompanied by the New Lyrica Orchestra.

In particular, the stage set-up is simple but it perfectly shows the urban setting of New York. The main performances from Tony and Maria, including the group productions are beautifully executed. The actors behind Tony and Maria did wonderful performances that brought few of the patrons to tears.

New Lyric is considered as the top company by the Association of Irish Musical Socities with huge successes from previous productions such as The Witches of Eastwick, Capacabana, Calamity Jane, 42nd Street and Wizard of Oz.

For lyrics of the songs, CLICK HERE...Adapted from Shakespeare's Romeo and Juliet, staged in 1957, and won the Tony Awards for Scenic Designer and Choreographer in 1958.
Posted by Reymos at 10:15 No comments:

One of a few of my favourite things

IT TOOK ME MONTHS AGAIN TO WATCH A MUSICAL AT THE GRAND OPERA HOUSE (BELFAST). This time, I watched the Sound of Music with a limited engagement in Northern Ireland as part of its UK tour. Honestly, I dont know well the film and the musical's scripts, so somehow watching it is quite new and exciting for me!

The musical was the talk of the town again when BBC(UK) searched the lead role by online public (viewers) voting thru its program, How Do You Solve A Problem Like Maria?. The competition was aired in the summer of 2006 and Connie Fisher declared as the winner among the 10 finalists. The prodctiion was opened in West End in November 2006 at Palladium Theater. The first international production premier was held in 1961, but it was first opened in Broadway at Lunt-Fontane Theater in 1959.

Connie's peformance brought the audience in a nostalgic mood from start to finish. The stage set-up, props, backdrop, including lighting were superb which provides a "real" effect to the scenes. Unforgettable scenes include: Maria and the children singing Do-Re-Mi, and Mother Abbess' rendition of Climb Ev'ry Mountain!

For additional info about the production, visit this LINK; and for its forthcoming shows, click HERE.
Posted by Reymos at 20:41 No comments:

A night to remember

I WAS FORTUNATE TO BE INVITED TO ATTEND the much-awaited comeback concert of Spandau Ballet. After 20 years, the boy band visited again Belfast last nite (14 October) to entertain their avid fans (including myself watching them live for the first time) since 80s. The concert kicked-off with their new songs from their latest album, “Once More” and top-chart songs such as “Through the Barricades” and “Gold”. The lead singer, Tony Hadley still got the elegant and well dressed persona and the golden voice - having the maturity and emotion singing their old songs.

The crowd was singing along when the band sung “Through the Barricades” which quite meaningful to the people in Belfast depicting the situation during the troubles in the 80s. As usual, I brought my digital camera and capture some parts of the performances. Everybody was dancing when the Spandau Ballet finally sung “Gold” at the end of the concert. I really enjoyed the night as I was also remembering those old times when I was still in university humming their ballad songs.
Posted by Reymos at 02:04 2 comments:

I watched this musical in June 2009 and honestly, this is quite a different mood of watching live shows at the Belfast Grand Opera House! The audience was singing loud, clapping their hands, enjoying as they sing along with the artists on-stage. Im not a "Take That" fan, but this boy band group (reunited few years ago) is massive popular in the UK! So, if you know all the fav hits from this singing group, Im sure you will enjoy this watching as well.

Finally, the overall production is superb, the lighting, backdrop and choreography are exceptional.; except for the sound system at the upper floor of the Opera House.
Posted by Reymos at 05:28 No comments: 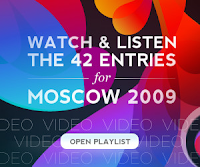 Click the link below to watch and listen the participating countries. Can you pick your top 10 entries? Watch the final round on the 16th May 2009!

This is my playlist for the first round of the semi-finals which I chose, Finland, Bosnia, Iceland, Romania, Malta and Turkey as my top 6 entries for the finals, including Andorra, Belgium Sweden and Israel to complete my top 10 fav songs. Please dont forget to visit my Eurovison Song Contest Blog for updates.

I dreamed a dream (Les Miserables)

Im inspired to share this clip when I watched the sensational rendition of the song from one of the contestants of the popular UK talent show, Britain Got Talent. Her name is Susan Boyle, a Scottish 47 years old that impressed the judges, including Simon Cowell himself and a big surprise to everyone.

Well, there is so much talks over Youtube channel now after Susan's clip was posted this week. It is annoying to read comparisons between Lea Salonga who sung it in Broadway and Susan who just starting her quest to a new career. Frankly speaking, there is no comparison at all - it is like comparing an apple and pineapple. The message of the song is really beautiful and while watching Susan, it reminded me of the musical that Ive watched live in West End two years ago and Im still hoping that I will be able to watch Lea singing this song as she did it on this video, maybe in Broadway...
Posted by Reymos at 07:48 3 comments:

A moving song for a beautiful story of a young boy who wants to be a ballet dancer. I bought the album of the musical when I watched it in West End two years ago and Im still planning to watch it again for the second time around.

Blood is not thicker than water

I watched this musical and it touched my heart. It is funny but serious towards the end. I think it really shows us the cycle of life and the irony of it as well. Some people will say, what a coincidence but, there is always a reason why things happened.


I could not imagine the emotion that mother could bear when she realised that her sons will kill each other. Sometimes the truth sets as free but we have to face the consequences from it, maybe it brings bad or good to us, but expect the worse.
Posted by Reymos at 11:40 1 comment:

I had the opportunity to watch this musical in Belfast, the place where Titanic was built in 1911 - sailed to Northampton for her final voyage to New York. Unfortunately, she did not make it to reach the final destination in April 1912.


What really impressed me about this production is the number of cast playing on stage at one scene...very moving and I felt like I was there witnessing the fateful night of sorrow for those who were boarded the cruise.
Posted by Reymos at 21:31 No comments:

A celebration for Pinoys - courtesy of Lea as Fantine (Les Mis)

Well, after giving birth to a baby girl two years ago, Lea (aka Miss Saigon) did perform in Broadway again, playing Fantine in Les Miserables production. She will explain why it is a celebration for her and her countrymen/women in the Philippines.

Im proud to be Pinoy (Filipino)

Filipino artists around the world are the priceless possessions of my home country, Philippines as my history books says as the Pearl of the Orient Sea! One of them is Lea Salonga. I had the chance to watch her in CCP for her portrayal as Kim for the long running musical, Miss Saigon. And then, I watched the musical again in 2006 when the UK production did their British tour in Northern Ireland. I was really proud because the main cast, including The Engineer, and the dancers were Filipino talents. Brilliant production from Cameron!

On the other hand, the clip is quite monumental for Lea as a young talented girl who did impress Cameron's team to cast her as Kim. She was innocent and confident which did make proud us Pinoys in the music industry around the world. She became an inspiration to young Filipinos nowadays of what she achieved and brought honor and fame to the Philippines. BRAVO LEA...

I did my review as well for this musical which is posted in Dooyoo - a product review site. This is the link: Miss Saigon
Posted by Reymos at 18:14 No comments:

A feeling of being scared

One of the best and entertaining musicals ever that Ive watched in West End. The choreography, the cast, the music and of course the talented portrayal of Leon Cooke as Billy. An adaptation from the film of the same title, a story of the young boy who wants to make a difference and making his life meaningful at the end. Determination and support from parents are the key to success, regardless of hardships and trials. Leon Cooke was playing as Billy when I watched in 2007.

Footloose - what an inspirational production

I love to sing and dance and this musical just kicked my butt and pushing me to sing along with the cast and even lifting my feet to syncronise with their moves on stage.

I watched the film itself and honestly, both the movie and on stage are very good. To read more about my review since I watched the musical in Manila and in Belfast, click the link: Footloose.
Posted by Reymos at 08:44 No comments:

I had the chance to watch this one of the longest running musicals in West End last September 2007. Unfortunatetly, it was not Lea Salonga playing Eponine. The production was great - from backdraft to stage set-up! There is always a good reason to watch it again in West End! The clip is featuring Lea singing, On My Own. Very moving scene.

My Other Personal Sites

Ask Me Anything, Please?

TRIVAGO...trip-vacation-go! This is where my photos taken during my travels are featured, including my reviews of places that have been visited around the world. Hope you will enjoy it.

Reymos
Very simple person with a simple plan in life. A registered Philippine civil engineer, an urban/environmental planner, a lecturer/tutor; plays badminton, loves to swim, sing and dance; has the passion in drawing, writing reviews/poems and reading, and a photo enthusiast.

I dreamed a dream (Les Miserables)

Tell me it's not true (Blood brothers)

On my own (les miserables)